ESC is not FM / DMR, it has the same function as the Red menu key on the GD-77, which is VFO / Channel mode

Quick menu is dependent on whether you are on the Channel or VFO screen, and you don't need to document the quick menu in this graphic, because there would not be enough space.

Note. On + Orange + P1 only enters firmware update mode if the OpenMD9600 is already loaded. Before the firmware is loaded, you need to disconnect the power , then hold Orange and P! then apply power

The "FN" (SK2) requires long press to lock / latch before other keys can be pressed, as the mic does not support more than one button being pressed at a time.
Top

Thanks Roger,
I have labelled it OpenMD9600 as you referred to it that way.
In the User guide (section "Variations between different supported radios") it refers to SK2 being referred to as Function in parts of the manual.
I have changed the Fn designation in the image to SK2 as indicated in your reply. Do you think I should change all sheets to use SK2 instead of Fn ?
(Only the GD77 uses a Blue button on some models - all rest are Black (I think))

I will make similar changes on the OpenGD77 and DM1801 cheatsheets and submit a PR with new svg files and changes to OpenGD77_User_Guide.md 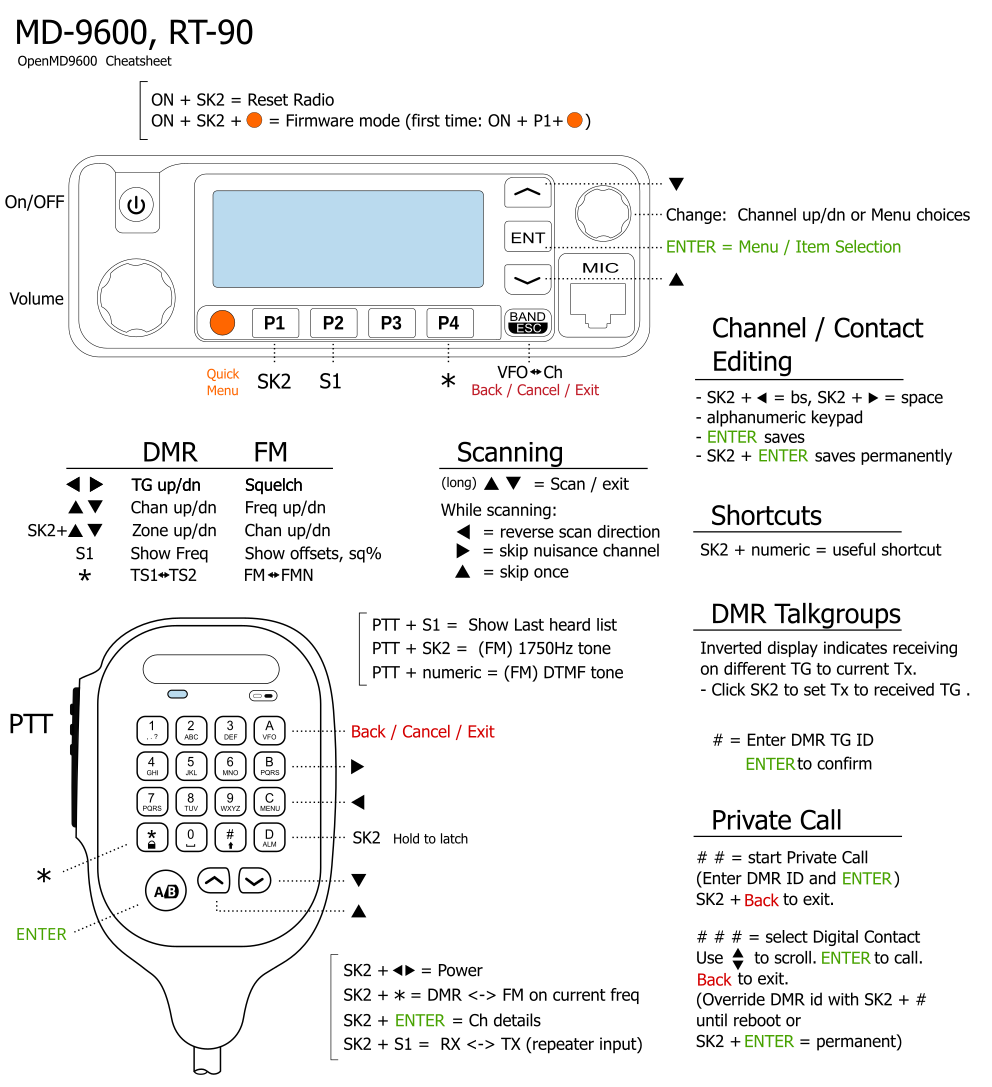 I think its best to use the terms SK1 and SK1 i.e P2 = SK1, even though these terms originally came from the GD-77 buttons.

Probably the names SK1 and SK2 may have been abbreviations for Side Key 1 and Side Key 2, but because they are abbreviations I think its OK to use them in the MD9600 documentation, as it would be very confusing to change all the User Guide to say "SK1 (P2 on the MD9600)" every time the key was mentioned.

The reason that P1 is used as SK2 not SK1 is that SK2 has the majority of the functions attached to it, and its easier for the operator to find and press P1 even if they are driving a car etc than to fumble and find P2, albeit P1 is does not latch, so it would require 2 hands to execute the functions on P1

On the GD77, the SK2 button is more easily accessible than SK1, hence why it was chosen to be the 'function' key

I guess we could change the whole User Guide to refer to SK2 as the "function" key, but I'm sure people would object to such a large change.
Top

Very nice diagram and info. One small point, I believe S1 should be changed to SK1. Thank you for the work on this.

Also long press of Up arrow on the front panel starts a scan.


However, I don't think it would be practical to document button function on the diagram, and people should ultimately refer to the User guide
Top

This is a very good cheat sheet. But may I respectfully disagree about using the term SK2? It is meaningless on the 9600, and the reversal of numbers (SK2=P1) is confusing. The developers began with the GD-77, and have worked with all the radios. But not all users have that frame of reference. Which leads to my point. We are using Radioddity’s names for two unlabeled “side” keys. These keys are actually “modifier” keys like Shift and Ctrl on a PC or Fn on a calculator. The OEM names refer to their physical positions on the GD-77, which are irrelevant on the 9600, and may be irrelevant on future supported radios. I suggest that we name them according to what they do—for us.

The manual consistently refers to the “Function” button, after telling us which physical button it is on the various radios (see “Variations between different supported radios”). That’s good. I suggest we do the same on the cheat sheets. Abbreviate it “Fn.” put that under the P1 button instead of SK2, and put the word “Function” underneath it in smaller type. Then use Fn in place of SK2 in the rest of the cheat sheet. Now we’ve defined the button with a mnemonic abbreviation that indicates what it does.

For the same reason, I would call the SK1 key “Sh.” It is a (Sh)ift key, less important than the Fn key, but also modifying what another key does. Calling it Shift, or something similar, avoids the confusion of SK1=P2.

I realize I may sound pedantic here. But the OpenGD77 platform supports multiple radios, and may support more in future. Who knows where our friends in China will put the keys on the next compatible radio? Naming the keys as I’ve described will help keep the manual universal for all radios, and I believe it will make a new user’s experience easier. I also understand that sometimes things have to be how they are because everyone is used to them. As always, major thanks to the developers.
Top

Except the SideKeys aren't modifiers only, they are also acting as buttons with short, long and extra long press events.

So Function and Shift are irrelevant.

SK acronym could also stand for Special Key in this regard. 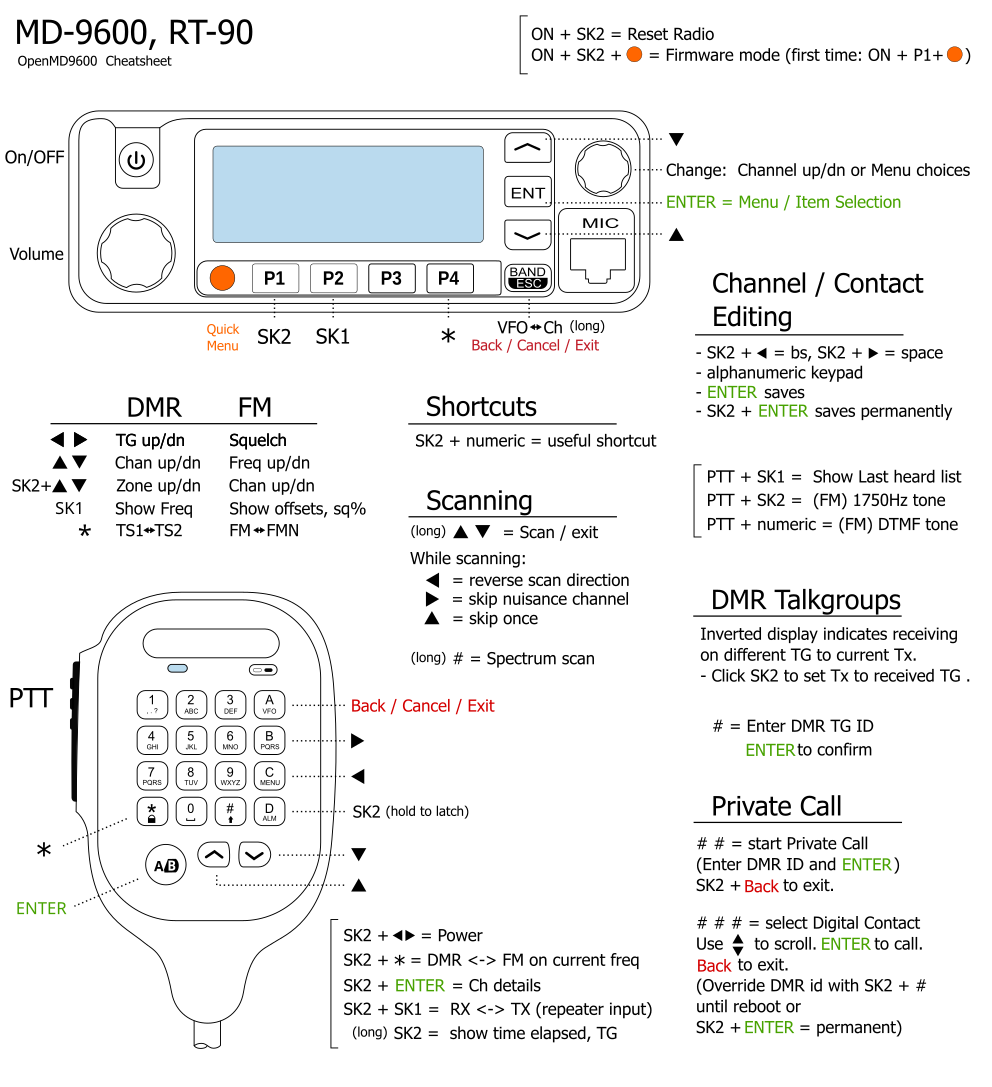 The PR will add/replace these into the current location in the doc.
I can also add svg or png files to the media folder with variations, if everyone? agrees the variations are useful as printed out cheatsheets to keep near the radio. If this is contentious I will not do it.
(You can see an Fn mockup on previous page)
Top

up /down buttons on radio reversed?
Top