This firmware is experimental and anyone installing it does so at their own risk.

There are at least 4 different versions of MD-9600 hardware, and if you install the incorrect version of official firmware, you radio will not transmit or receive. You can partially determine which hardware version you have, by opening the top of the radio and reading the version number printed on the top of the PCB.

Major versions are V2, V3, V4 , V4A and V5
As far as we are aware, the first V1 boards are actually labelled as V2.
Also V4A and V5 radios appear to be identical, so anyone with a V4A hardware version, should use the V5 OpenMd9600 firmware.
V2 and V3 radios should use the V2 version of OpenMd9600
If your V2 radio does not support dimming the display, please try the V1 OpenMD9600 firmware, as its probably V1 hardware radio.


EA5GK has supplied this list of links to various official firmware versions, and CPSs but there may also be other versions

The MD9600 does not have all the buttons on the GD77. At the moment these are the key / button mappings, and not all functions of SK1 and SK2 are currently supported

On the mic keypad

On the front panel, Up and Down and the rotary control, change some things.

In General Options, there is a setting called Button Remap, this changes the operation of the front panel buttons in the menus to be the same as on the Channel and VFO screens.


This is Beta / Experimental firmware, and does not have all OpenGD77 fumnctionality, and also contains many bugs
Notes.
Removal of the firmware 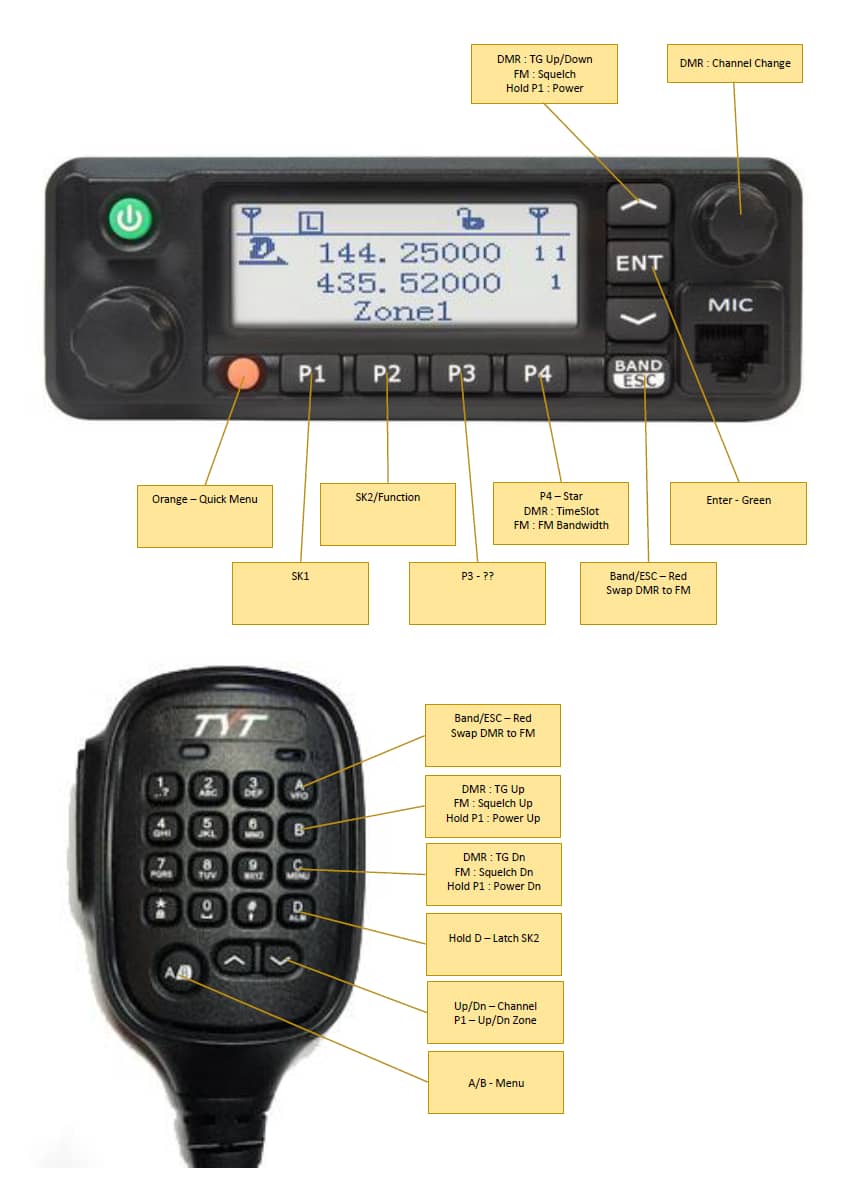 Is it safe to order a MD-9600 to run openGD77 or should I try and only buy certain versions ?
Top

As far as we know we have firmware for all of the currently available versions of the TYT MD-9600 and Retevis RT-90.

Of course with the current chip shortages it is always possible they TYT will need to change the design yet again but there is no sign of that at the moment.

How do we identify which hardware version a radio is? I am attempting to flash a Rugged Radio back to TYT firmware to enable VFO
Top

There is no easy way to tell.
The quickest way is just to try each version of firmware. All will load and run on any version of radio but only the correct one will transmit and receive.

deleted from this link,

can you upload it again?

I just tried to download using the given URL, and it works here.

Hello. Can this be installed on rt90 too?

I searched but didn't find anything about how to save a channel, ok from the vfo I choose the frequencies then I enter the menu and go to the channel details I add the information such as tone power and others, then I go back to the vfo I select the vfo for the new channel and the channel is created , then I go to the memories and choose the new channel, I go back to the menu again in the channel details I write the name I want to add and then I press enter or green at the end, but when I change channels and when I return to the newly created channel the name I added it no longer appears, that is, it is not saved, only the channel with all the information is saved but the name of the channel returns to “new channel ###” ! ANY HELP WITH THIS? thanks